Kedleston Park Golf Club in Derbyshire is widely regarded as one of the finest courses in the East Midlands.

Situated in the heart of England with great links by road, rail and air, the course is laid-out in 155 acres of stunning Derbyshire countryside surrounding the magnificent National Trust property, Kedleston Hall.

As a proud host to many prestigious events and Tournaments, including Regional Qualifying for The Open Championship from 2018, the course provides a challenging test for players of all levels.  There are 5 sets of tees measuring 5300-7000yds.

The club offers a competitive yet friendly and welcoming environment for golfers with extensive practice facilities and an air-conditioned clubhouse offering the finest Derbyshire hospitality.

Open to non-members and societies, visitors and guests, you can be assured of the warmest of welcomes at Kedleston Park.

Kedleston Park Golf Club strives to create a memorable golfing experience for all to enjoy.

The expansion of Derby during the 1930's led to the closure, in 1938, of the Markeaton Golf Club when the area was earmarked for development. The Markeaton Golf Club had been formed in 1895 and was one of the founding clubs of the Derbyshire Union in 1913. It was located on Kedleston Road on land, which is now occupied by the University of Derby.

When closure was imminent the club commissioned the respected course architect, and five-time Open Champion, James Braid, to design a course over mature parkland in the grounds of Kedleston Hall.

The onset of the Second World War in 1939 prevented construction, but in 1946 Kedleston Park Golf Club was formed.

John Morrison, from renowned course architects Colt, Alison and Morrison, was appointed to finalise the plans for the course using Braid's original design.

Two companies were approached to construct the course, J R Strutt Ltd, whose proprietor, John Strutt was an old colleague of Braid and Frank Harris Ltd. The machinery to maintain the course was obtained from the now defunct Markeaton Club. The course was one of the first to be created after the end of the war.

Kedleston Park has been further developed over the years whilst keeping its original layout. The greens were fully reconstructed in the late 1990's to the latest USGA's sand based specification, while a three-year renovation and improvement project to the courses bunkers, mounds and greenside complexes has been made under the expert guidance of Tom Mackenzie, of world-renowned golf course architects, Mackenize and Ebert in preparation for hosting The Open Qualifying from 2018.  Kedleston Park GC was also the host of the 2020 Faldo Series - England Midland Boys Championship, as well as hosting the Faldo Series – England Midland Girls and Boys Championship in August 2021 this year. 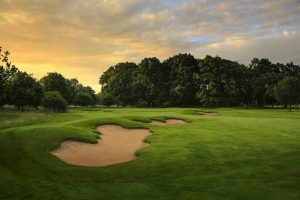 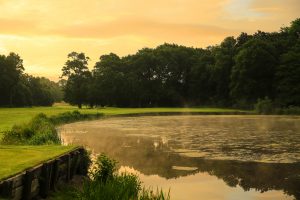 Nestled in the midst of the Derbyshire countryside, our golf courses offer the ultimate…

Constructed in April 1909 and opened for play the following year, the original 18 holes were designed by the…