An exclusive members club set in 120 acres of stunning, tranquil parkland on the north side of Preston, Lancashire with easy access from the M6. Our superb 18 hole, 6,278 yard, par 71 course dates back to 1892 with the design influenced by such luminaries as James Braid, Harry Varden, Alistair Mackenzie & Sandy Herd. In addition to our widely acclaimed course the golfing package available to members and visitors includes a purpose built teaching Academy linked to a 16 bay floodlit driving range, indoor and outdoor putting facilities, short game practice areas, plus a spacious welcoming clubhouse. Having hosted National and County competitions Preston Golf Club has a wonderful variety of holes and superb USGA constructed greens that offer a challenge to players of all abilities.

Preston Golf Club, a must play Lancashire gem, is situated in the Fulwood District of Preston. It was established in 1892 and modified by famous designers such as James Braid, Harry Vardon, Alistair Mackenzie and Sandy Herd over the years. It is a very testing parkland course where water hazards, tree-lined fairways and about 75 bunkers provide many challenges to play to your handicap. Added to this are excellent dining and drinking facilities in the Clubhouse, a very well-stocked pro' shop and a 16 bay, 250 yard flood-lit driving range where you can warm up before beginning your round.

It was on the 19th of November 1892 that James Rigby, the Medical Officer of Health and Nicholas Cockshutt, a local solicitor, consulted with George Lowe the professional of Lytham St Anne's about the construction of Preston Golf Course. A site was chosen on the eastern side of Preston adjacent to the Preston Pleasure Gardens in the district of Farringdon. Within a week 9 holes were laid out. The course extended over 43 acres and was approximately 2600 yards set in undulating meadows overlooking the River Ribble, complete with basic changing facilities. Preston had its first golf course and Sydney Hermon, formerly the Captain of Lytham St. Anne's Club officially opened it. Golf was played here for another two years until another course was opened in 1895 on the northern side of Preston in the district of Fulwood. The two clubs merged and became known as the Preston and Fulwood Golf Links and it has remained on this site to this day. The land was owned by the Clayton family and was farmed by two tenant farmers, Mr Morris from Mason Hill Farm and Mr Hill from Fulwood Hall farm. The land was then sold to the Marquis of Rothwell who owned much land to the North of the course. The word Fulwood was dropped from the title shortly after the formation of the new club.

18 holes were planned and designed with the help of George Lowe and extended over 4210 yards of fairly open but undulating meadowland. Since then the course has been changed a number of times for a variety of reasons and plans of these courses are still available for inspection. In these early years the Club enlisted the help of some very eminent golf players to design and to shape the course, notably Harry Vardon, James Braid, Alistair Mackenzie and Sandy Herd and much of what they suggested is still in place today 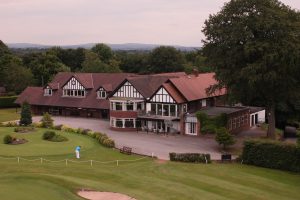