Opened in 1921 the current golf course was designed by the renowned golf course architect Dr Alister MacKenzie, and is tucked away in a beautiful, mature wooded valley at Beckfoot just outside the town of Bingley in West Yorkshire. Shipley has long been known as one of the best golf courses in the Yorkshire area and, with a continuous programme of investment in the golf course and facilities, we believe we will maintain this status. The Shipley Golf Club is a regular venue for the Yorkshire County and Bradford Union Fixtures, whilst also being the home of the Bradford and District Union of Golf Clubs.

History
Formally known as The Shipley & Saltaire Golf Club it was created in 1896 at an inaugural meeting of just 30 persons at the Manor House Shipley and the Rt. Hon. Laurence - 4th Earl of Rosse KP was invited to become the club's first President with subscriptions fixed at 1 guinea for Gentlemen and 10 shillings and sixpence for Ladies. The course was originally located at Moorhead where, after much wrangling with local farmers from whom land was rented, the Club opened the links on 6th March 1897. However, in 1919 the club took the monumental step of purchasing 124 acres at Beckfoot. The new course was laid out by Dr Alister Mackenzie together with a new clubhouse designed by Mr F Atkinson, a local Architect. The new course was officially opened on 20th June 1921 with the new name of "Shipley Golf Club Ltd" followed some months later on 16th September 1922 by the formal opening of the new clubhouse. In May 1931 Shipley was a founder member of the Bradford and District Union of Golf Clubs. At the outbreak of the Second World War all members called to arms were made 'honorary members' until the date of their demobilisation. To aid the war effort for the duration it was compulsory for part of the course to be let for grazing and play was restricted to 14 holes. In August 1940 Henry Cotton took part in an exhibition match at the club with proceeds donated to the Red Cross.

The Throstle
The insignia of The Shipley Golf Club is a throstle, an old English word for the common song thrush (Latin turdus philomelos). The golf course is situated in the small town of Bingley which has long been known as "The Throstle nest of Old England".

In peaceful, quite surroundings away from the traditional office environment, we can offer a conference room for up to 120 people, or alternatively a small meeting room for up to 15 people. Our costs are very reasonable and we can cater for anything from coffee, tea and biscuits to full dining facilities. 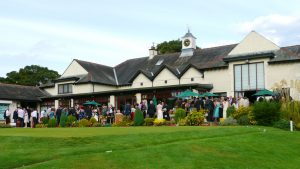