The course has received many accolades over the years; The Ultimate Member’s Club 2015 by the 59club; World’s Best Golf Clubhouse at the World Golf Awards, 2017; 5th Best Golf Resort in the UK (#1 in England) in Golf World’s Top 100 Golf Resorts in the UK of 2017. And finally at the 2018 59club awards, Stoke Park received the Gold Flag award awarded for outstanding customer service for the 5th successive year.

Stoke Park is also notable for its many appearances on film over the years. Although the list is long, including the mini-break in Bridget Jones’ Diary and the infamous closing scene to Layer Cake, however it is bound to be Goldfinger which jumps to a golfer’s mind. Sean Connery’s James Bond tangled with Auric Goldfinger on Stoke Park’s 18th hole to produce the most memorable game of golf in cinema history.

As well as being a challenging and demanding course you will find it hard not to be stirred by the exquisite views and landscapes of the championship course. Harry Colt designed the course back in 1908 with the philosophy that his courses should blend in with their surroundings, be part of the landscape, not imposed upon it. He was blessed as the grounds had originally been landscaped by Humprhy Repton and Lancelot ‘Capability’ Brown in the 18th century.

Despite the accolades, the fame, and the history of England’s Original Country Club, Stoke Park does not sit still. In the last 3 years every bunker at the club has been re-built, re-modelled and re-positioned, close to £1,000,000 investment. As of April 2018 every bunker on the golf course will be brand new which has significantly improved the playability and enjoyment of the course. When playing Stoke Park, there is a satisfying need to hit the driver hard and you should be OK if it’s a little off line. There is very little heavy rough to lose a ball, however to really score well one will have to strategically navigate the new bunkering and putt well over the undulating greens.

We have built a brand new short game area at the far end of our range which has a massive USGA spec green, surrounded by bunkers, hollows and different lengths of grass which enables you to practice any sort of short game shot imaginable. All of this whilst developments to the Golf Academy continue, and there will be ongoing improvements to the front area of the house with brand new short game facilities available closer to the clubhouse.

The club’s 27 hole course is made up of the three independent nine hole courses, Colt, Alison and Lane Jackson, and is one of only a few courses in Europe to do this.

Colt’s ethos was that a golfer should be able to clearly see where they are going. Nowhere is this clearer than our 400 yard Par 4 opening hole, which heads away from the glorious surrounds of the clubhouse down a wide tree-lined fairway to the large, well-bunkered green. This is followed by 2 testing holes in to the prevailing wind to get you into your round. Colt always made the most of natural surroundings when working on a course, using contours and slopes to create undulating fairways and defend his greens. The 3rd hole is a great example of this – the first par 3 plays long up the hill, try to stay long and left to avoid the slope away and bunkers to the right. Stoke Park’s putting surfaces are often large, subtle and rolling, and this is certainly the case on the long Par 4 4th hole where members will often jibe that you shouldn’t ever give a putt here or later on the 7th hole. Bunkers were very important to Colt, placed subtly around his designs. His liking for cross bunkers is on glorious show at the risk reward Par 5 5th and Par 4 6th, the latter looking particularly spectacular from the tee, it being difficult to decipher if there’s more sand than grass ahead.

Colt’s mastery of short holes has never been so obvious than Stoke Park’s signature 7th hole, an awe-inspiring Par 3 often described as his single finest hole. A truly magnificent short hole, played over a lake that runs all the way along the right side of the green, but is also heavily bunkered on the left. One of the largest greens on the golf course could not look smaller, especially if the prevailing cross wind is up. Finding the putting surface with your tee-shot does not guarantee your par as the putting surface slopes strongly down towards the water with a big tier running the length of the green. It will require all your guile and skill to make your par, so if you succeed breathe a sigh of relief and head up to the 8th with a fresh bounce in your step. When Colt designed the course in 1908 he was assisted by a young apprentice – Dr Alistair Mackenzie. Mackenzie was such a fan of the 7th that he used it as inspiration when he went on to design Augusta nearly 20 years later in 1927 – deep praise indeed. If you were to place Colt’s 7th alongside Mackenzie’s 16th at Augusta the two would form almost a perfect mirror.

The 9th, another testing par 4, presents you with a great backdrop of the stunning Georgian mansion as you make your approach. Hole out and take in the surroundings, you’ve made it through Stoke Park’s toughest loop – you are fully deserving of your choice of refreshments at our Halfway House.

The Alison nine begins with two short holes and the Augusta ‘feel’ continues. The Par 4 10th hole reminiscent of the 7th at Augusta with hungry bunkers surrounding the green, and the Par 3 11th equalling the beauty of our signature hole, with strong similarities to Augusta’s 12th hole. Stop on this tee to truly take in the beauty of Stoke Park – surrounded by tall trees, the tranquillity of the smooth green, and the billowing fountain.

Colt’s cross bunkering is again apparent on the long Par 4 12th which will require two good shots to make the distance, then the Par 5 13th offering a little respite and a good birdie chance. The 14th once again brings you back to the mansion, setting a spectacular backdrop to your second shot. The final 4 holes allow for plenty of views of the wonderful building, none being closer than the 15th tee playing adjacent to the east side of the house and plagued with bunkers once more. The short Par 4 16th is one of the cleverer designs, playing alongside the ‘never-ending’ lake installed by Capability Brown all those years ago. The fairway slopes strongly from right to left, so when it comes to your second shot the water down the left side of the green somehow seems magnetic. When you step on to the 17th you are reminded by a plaque that you are now entering Bond territory (knock it left if you want to see where the infamous ‘ball-switch’ happens). Standing there it is apparent your work is not yet done and will need every ounce of concentration to overcome the finishing holes ahead. The 17th, a par 4, plays as a slight dog leg, with precision and accuracy needed from the tee to leave a second shot that plays over a newly widened lake. The 18th provides a fitting end to your round at Stoke Park. A solid drive to the brow of the hill is required to give a clear view of the green. With the James Wyatt designed mansion once again in full view, a second shot to the heart of the green will leave one last heavily breaking putt.

Having completed your round, your day is complete with a small libation on the Orangery Lawn, reminiscing over your game, whilst taking in the breath taking views of the memorial gardens. If your hunger for golf is still not sated, then the Lane Jackson course beckons... It is a testament to Colt’s genius that his courses are admired by golfers at every level of the game. They still provide a genuine test and stand up to the challenges brought on by today’s modern equipment. Colt has without doubt left his legacy at Stoke Park.

The Lane Jackson loop was added to Stoke Park’s facilities in the mid 1990’s. The course was built in sympathy with the surrounds and in Harry Colt’s mould. It plays a little shorter at just over 3,000 yards (by comparison to the Colt 9 – 3,427 yards) but presents a fantastic golfing challenge and is an ideal place for beginner golfer’s to cut their teeth.

The opening 3 holes are particularly special all contending with Capability Brown’s ‘never-ending’ lake. The 19th opener isn’t for the fainthearted. A tight tee-shot to the brow of the hill is followed by a narrow approach to the green. Be wary of pushing your approach to the right off the hanging lie because the water is waiting. Finish up, then across the bridge to the 20th tee to hit off the first of two island tees on this loop. Standing here you really get a sense for what Capability Brown was trying to achieve all those years ago – spectacular! The 21st stands proud as one of the best par 3’s on the whole estate, not easy when compared with the other treats that Colt designed. 168 yards across the lake, with the Humphry Repton bridge looking on to see how you fare. From here you head down to the second of the island tee’s for the 22nd - the first par 5 of this nine. Usually played in to the prevailing wind it’s certainly not a guaranteed birdie, but turning back on the 23rd will be a welcome breather. The course meanders through the flat landscape for the next few holes with beautifully sculptured bunkers framing the holes. The next challenge really surfaces on the 26th. The par 5 is a monstrous dog-leg from left to right. The further the hole bends the narrower it gets up until your approach which is played in with tall trees flanking the right side to a shallow green. Hitting it in two should afford plenty of bragging rights! The Lane Jackson loop is completed with the 27th which a great risk/reward par 4. Do you take on the cross bunkers with your tee-shot to offer a fantastic birdie opportunity, or play to the meat of the fairway but contest with the two tall tree’s protecting the approach?

The golf course is further enhanced by unrivalled practice facilities for the area, a double-ended driving range with an all-weather mat or grass to hit from including some undercover bays for practice in inclement weather. A brand new short-game area with new bunkers, and opportunities to chip and pitch has been installed at the far end of the range. And finally an indoor swing studio with the latest TrackMan technology which houses our 7 teaching professionals. 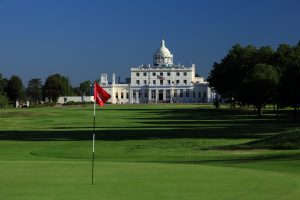 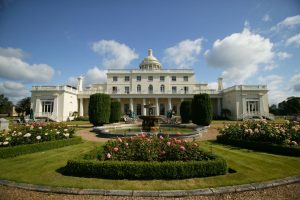 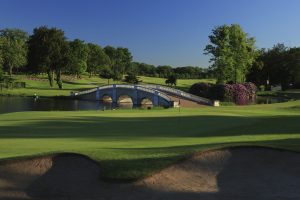 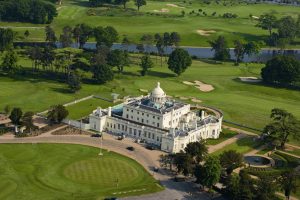 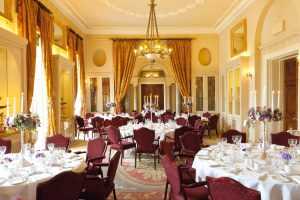 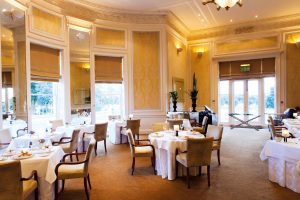 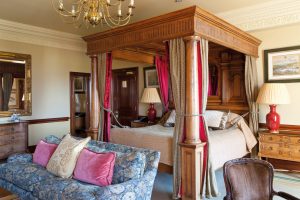 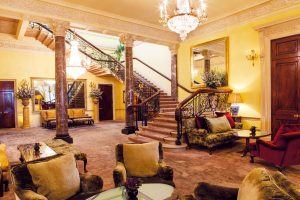 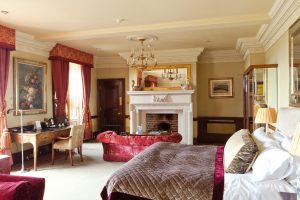 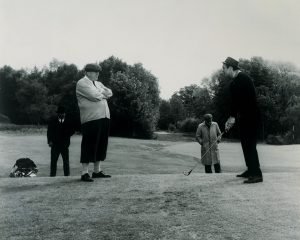 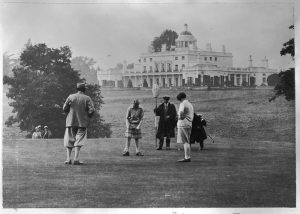 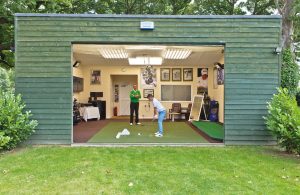 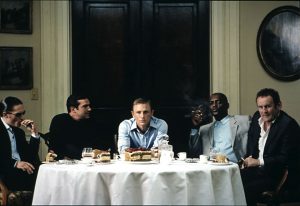 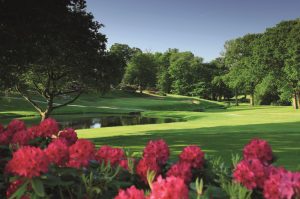 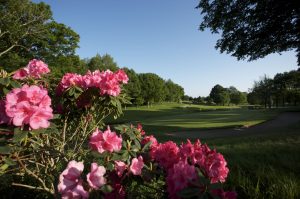 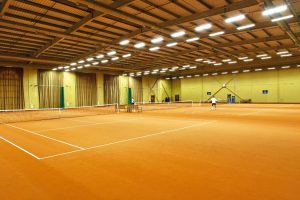 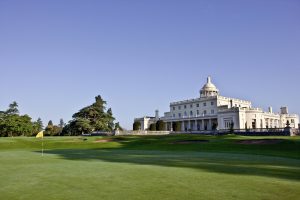 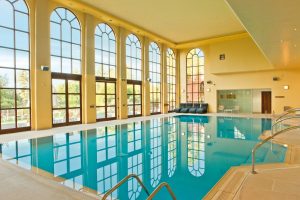 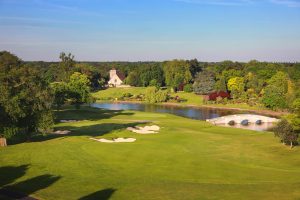 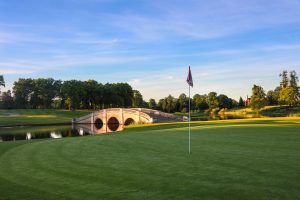 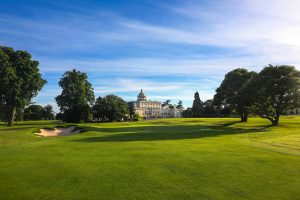 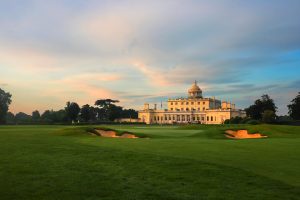 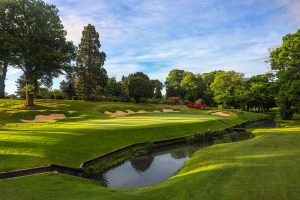 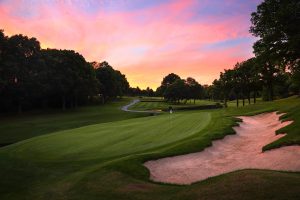 The course was built 26 years ago and was built to host large tournaments, which it did, hosting the Benson…