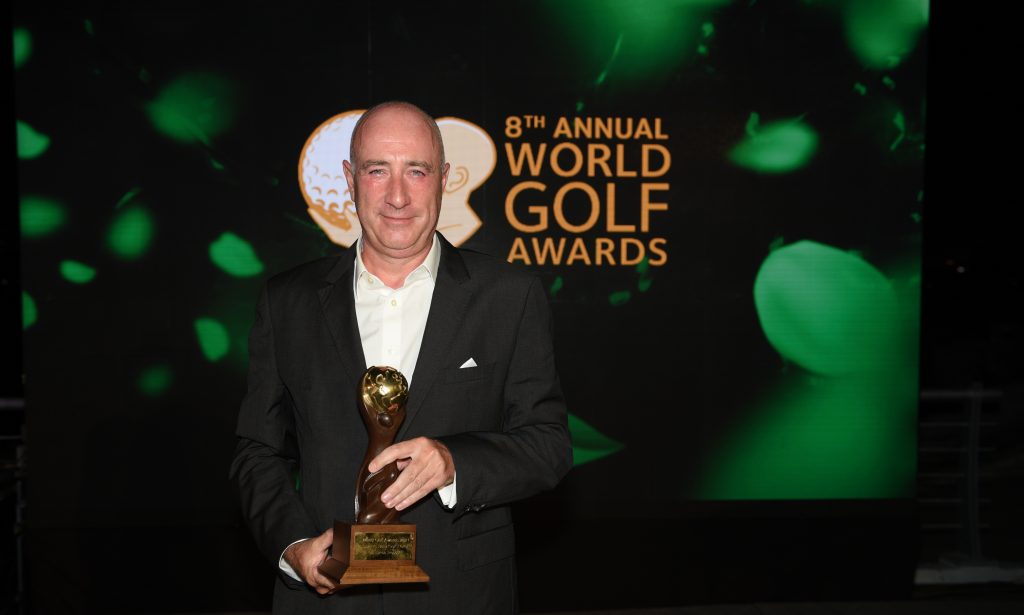 The illustrious World Golf Awards (popularly referred to as the golf Oscars), which recognise excellence in world golf tourism, held its eighth annual awards ceremony last night at the luxury Park Hyatt Dubai resort. At the ceremony, La Finca Resort was once again named ‘Spain’s Best Golf Hotel’. This accolade comes on the back of the award received only last week at the World Travel Awards ceremony, where the resort complex was named Spain’s Best Sports Resort.

Attending on behalf of La Finca Resort was Brendan Dwyer, the resort’s General Manager of Hospitality, who proudly stated that “receiving this prestigious award yet again brings a welcome injection of optimism for the future. Not only is it a fantastic acknowledgement of the hard work done by all the staff at La Finca Resort; it also shows that, in spite of all that has happened, we continue to deliver outstanding quality in our facilities and services”.
However, these are not the only prizes that La Finca Resort has at its sights this year. It has also been nominated in the second edition of the Spain Luxury Hotel Awards in the Best Luxury Mice Hotel category, confirming the resort’s status as one of the best corporate events venues at Spain. La Finca Resort is a contender in these awards, which recognise the efforts of hotels and resorts to be among the best in their field, focusing above all on excellence in customer service, design, facilities, and efficiency.

Located on the Costa Blanca, in the south of the province of Alicante, and blessed with an exceptional climate, La Finca Resort is one of south-eastern Spain’s most iconic resorts, and a favourite haunt of golfing enthusiasts. An oasis of calm where golf lovers can enjoy the superb quality of its three courses: Villamartín, Las Ramblas and La Finca. All three have undergone significant improvements in recent months, including the redesign and construction of bridges at hole 16, La Finca Golf’s iconic par 3, and the maintenance programme for the greens that has kept them at tournament standard throughout the year — not forgetting the creation of havens for native species and landscaping to improve the sustainability and playability of each of the 3 courses. It is worth pointing out that only last month, the magazine Today’s Golfer ranked La Finca Resort 47th in the list of the 100 Best Golf Resorts in Continental Europe. Facilities at the resort include a five-star hotel (La Finca Hotel) with 120 guest rooms, an outdoor swimming pool, a glazed lounge next to the garden with capacity for 350 people, a tennis court and two padel tennis courts, and a health and wellness centre. (La Finca Spa). The latter includes a gym, a water circuit, changing rooms, massage and treatment rooms, and La Finca Sports, a high-performance, multi-disciplinary training centre — in addition to nutrition and physiotherapy services. And for those looking to enjoy mouth-watering cuisine, there are a host of options.

These range from The Hub café and 3 Club Houses, each located on its respective golf course and offering a varied menu of snacks, meals and drinks — including healthy options — to the delicious fusion of traditional Italian and Mexican cuisine served at Frijolino.

Next season, there will be even more gastronomic alternatives available with the addition of new dining facilities. These include Citrus, a new restaurant with a groundbreaking design, located within the Hotel itself, which will offer the finest traditional Spanish cuisine with a designer twist. Then there’s Misto, an innovative restaurant specialising in rice and grilled dishes, and boasting an exclusive ambience. Here, the most discerning diners will be able to enjoy the finest selection of Spanish and international meat dishes, as well as Alicante rice dishes cooked over a wood fire — all
accompanied by the best wines from Spain and across the globe.