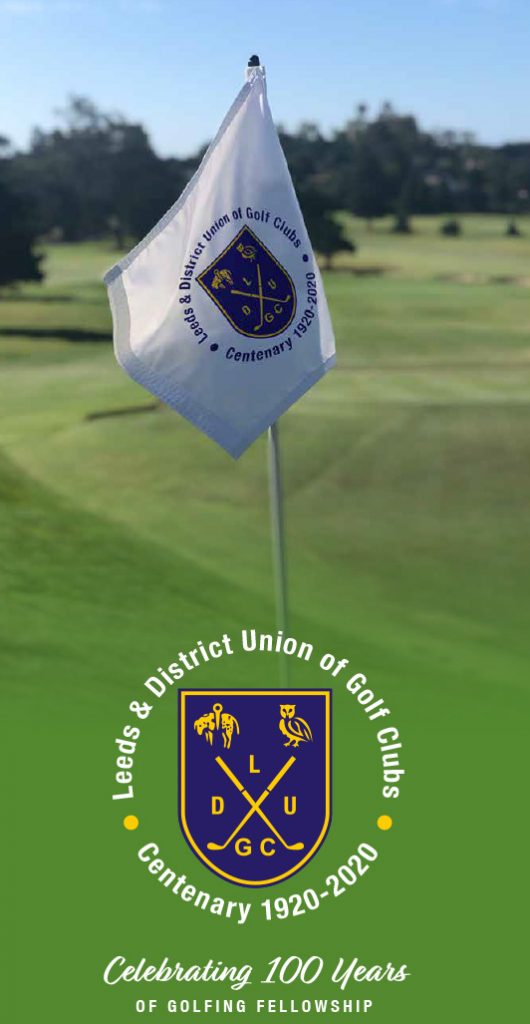 The Executive of the Leeds and District Union of Golf Clubs is pleased to announce that the Union will now celebrate 100 years of golfing success and fellowship during 2021 starting with mid-May playing fixtures.

The Union was officially 100 years old in September 2020 and the original plans for the Centenary were postponed due to the Covid pandemic and the subsequent closure of Clubs. The fellowship and camaraderie that the game of golf and the Union provide has been missed by everyone and the Executive is determined that this significant landmark event will be celebrated with a revised Centenary programme of celebrations throughout 2021, culminating in a Grand Centenary Dinner in March 2022.

Leeds & District Union of Golf Clubs Centenary President 2020-21 Geoff Mortimer, a Member and Past Captain of Moortown a founder Club, who hosted the 1st Ryder Cup on European soil in Leeds, commented:

“On September 15th1920 nine of the thirteen golf clubs who were founded in Leeds between 1891, when Wakefield opened, closely followed by Headingley in 1892, had a vision and sense of purpose to join together and create the Leeds and District Union of Golf Clubs. Its purpose was, and still is, to further the interests of golf within the Leeds Region, to provide opportunities for discussing the matters of common interest among the member clubs, as well as to arrange competitions and team matches. Today we have 28 clubs affiliated and active.

During my year as President I’m planning to take a 4 man Executive team out to play at every member club. We hope to have a little fun with this, hand out some Leeds & District Union Centenary plaques and special prizes as well as pushing on with our charity fund raising for the Leeds Children’s Charity.

We intend to make the celebrations, both playing and social, for the rescheduled Centenary year, even more meaningful than we originally planned and I am sure that all our members will enter into the spirit of things with renewed enthusiasm!”

Building on the original Aims and Objective the Executive is committed to raising awareness of the Union amongst potential member clubs and players within the affiliated clubs, encouraging new Associate Membership. As current guardians of the Union they want to ensure its sustainability for the future in three principal ways:

Recognising Contribution to the Union

The Union has had a great impact on many Clubs, Teams and Individuals throughout its 100 years.

It is appropriate that tribute is paid to predecessors and those who continue to work tirelessly on behalf of all those involved to provide competitive and enjoyable golf.

The golfing Championships and Associate Members competitions run by the Union Executive are very popular with the members from the affiliated clubs, all of whom provide tremendous support along with the help provided by very generous sponsors.

Stepping up fundraising for charity

Since 1947 the Union has supported the Leeds Children’s Charity which delivers free respite to young people between the ages of 7 and 11, as well as offering life experiences so different to their normal lives. Over the years the Union has contributed in excess of £230K to help those less fortunate, and in 2021 intend to continue Making A Difference (MAD) to some of those Leeds children.

Members of the Executive have spent considerable hours sifting through yellowing press cutting and ancient notebooks to establish a ‘100 year’s timeline’ graphic to demonstrate the development and growth of the Union over the century. It charts progress from the first meeting held at the Hotel Metropole in Leeds when Mr Oliver Swithenbank from Leeds Golf Club was invited to be the first President of the Union and the annual subscription was the princely sum of two guineas per annum!

A Centenary Launch Luncheon at Moortown GC is planned to which the Yorkshire President and the Inter-district Union Presidents will be invited. The Lunch is to be preceded by golf at Moortown and was originally planned for the start of the season however, due to Covid restrictions, this is to be moved towards the latter half of the season at a date to be confirmed.

The Centenary President will be visiting every member club through the playing season accompanied by three other LDU Executive Members for 2 nr friendly 4 balls to compete for the Centenary Presidents Prize. We will be taking the opportunity to present every Member Club with a Leeds & District Union Centenary Plaque.